Is the BMW i4 the best electric car available right now?

If you’re going to electrify one of your most famous models, the 4 Series is a great place to start.

Launched earlier this year, the i4 aims to take the art of electric cars to another level by matching its tantalising performance with executive design.

Built to rival the likes of the Tesla Model 3 and the Polestar 2, BMW have set their sights on the very best electric cars on the market right now.

Eager to see how it compares against some of the current industry benchmarks, we’ve been testing out this eDrive 40 M Sport edition to understand just how good it is.

The BMW i4 is priced beyond some of its main competitors, with OTR prices starting at £55,345 for the entry eDrive 40 Sport edition.

However, if you would prefer to pay monthly, a BMW i4 lease remains a competitive option, with prices starting from £538 a month ex VAT* at the time of writing.

With 2% Benefit in Kind tax rates and a competitive range, the BMW i4 is one of the standout contenders in the company car sector.

*Prices correct at the time of publication and subject to change

There are two model choices to pick between, the eDrive 40 or the more performance-focused M50. All i4 models have an 83.9kWh lithium-ion battery pack.

The eDrive 40 has one electric motor and is rear-wheel drive, providing 340hp and 540Nm of torque.

Move up to the M50 and you have more performance. Powered by two electric motors and an all-wheel-drive system, it produces 536hp and 795 Nm of torque.

While we can only imagine how good the M50 must be, we found this eDrive 40 to be comfortable in all environments and it never felt lacking when it came to performance, making it a fantastic pick out of the two.

Model dependent, the i4 is available with a claimed range of up to 365 miles. That range drops to 344 miles for our M Sport model.

At 344 miles, it is in a similar ballpark to the Tesla Model 3 Performance (340 miles), but, as its name suggests, the latter does come with improved performance figures.

During our review, we averaged around 3.4 miles per kWh, giving us a real-world range in the region of 280 miles. This remains competitive for this class, and, in the right conditions, I think there's the potential for this to be extended closer to the 300-mile mark.

The i4 is capable of charging at up to 200kW, which will take it from 20 to 80% in around 30 minutes. However, using the more common method of a 7kW home charger will take around 12 hours for a full charge.

For a long time, the Model 3 was the class leader for those considering an electric car lease deal, because of the charging advantages it held over the likes of the i4.

However, the BMW i4 is now one of the few non-Tesla EVs in the UK that are now able to use the Tesla Supercharger Network, meaning you can charge it alongside its biggest rival.

*Range figures are subject to driving habits and real-world conditions.

The i4 was one of, if not, the most popular cars we’ve ever tested at Carparison HQ. Everyone who stepped foot inside complimented the assured and composed nature of the drive.

In this M Sport edition, the acceleration was not quite at the Tesla levels, but it comes close and is more than quick enough for everyday driving. The brakes are strong but not grabby in a way some electric rivals can be.

The ride is supremely smooth and the comfort levels inside the cabin are as good as they come. With the M Sport Pro Pack fitted to our i4, it was aided by the M Adaptive Suspension.

Despite going electric, you get the same typical BMW driving position. You’re lower to the ground and tucked in neatly behind the wheel. Of course, this is personal preference, but it feels immersive to drive.

Even when you’re travelling at motorway speeds, ride noise is minimal with BMW doing a fantastic job of keeping external noise out.

Such was the quality of the drive, it’s an EV you won’t get tired of driving in and around town, but will also enjoy tackling long haul journeys.

Of course, all design choices are subjective, but for me, the i4 might be the best-looking electric car on the road today.

What makes it look so sleek? The fact it doesn’t look explicitly electric. Aside from the false front grille, it looks like a 4 Series. But make no mistake about it, it’s a real head-turner.

The stance and presence of the i4 is something many rivals will be unable to match. It looks incredibly fierce.

It curves on the bonnet and the dipped headlights give it a commanding profile that demands attention.

The Tanzanite Blue metallic finish complements the red brake callipers beautifully and adds to that premium nature of the car.

The interior is no different. It’s a very typical BWM set-up. Everything feels premium, expensive, and very well built. BMW’s attention to detail throughout the cabin elevates the cabin,

The 4 Series has so often been the go-to model in the German manufacturer’s line-up, but how effortlessly they have electrified it in the form of the i4 makes it a hugely compelling option for your next BMW lease.

BMW have done a great job of making the cabin feel compact but also spacious enough to work as an everyday family car.

Taller passengers and drivers will get by fine with plenty of adjustments available in the driving position.

While the sloping roofline does affect headroom slightly, it is manageable for those on the taller side. The Model 3 does feel more spacious inside, but the i4 is by no means uncomfortable.

Another feature that sees it pip the latter is its hatchback opening. It creates a much wider opening and unlike the Model 3, you're not hindered by the load height.

The rear bench folds in a 40:20:40 split and if you do drop down the back passenger seats, your storage space rises to 1290 litres.

What elevates the i4 to another level is the development of BMW’s iDrive 8 system, which originally debuted in the iX.

You still have the flexibility in the various control methods, including the rotary dial, touch screen and the new voice assistant.

Compared to the iDrive systems of old, the new updates naturally bring more sub-menus, but it remains very user friendly, responsive and customisable.

The wide displays allows you to absorb so much more information at once and everything is well within reach of the driver.

Being the M Sport edition, it came fitted with the Technology Pack Plus, which features the brilliant Harman/Kardon Surround Sound Audio System, which sounds excellent.

The i4 has not yet been tested under Euro NCAP standards, but don’t let that put you off choosing it for your next BMW lease deal. The 4 Series can be used as a good reference point, having scored five stars and a 97% score for adult occupants during its tests.

Available with an array of driver assistance systems as standard, the i4 comes with Crossing-traffic Warning, Rear Collision Prevention and Lane Change and Departure warning among others.

As part of the Tech and Tech Plus Pack, a Head-Up display is an option to give you more information behind the wheel.

The BMW i4 is one of the most assured and well-rounded electric vehicles that we've had the pleasure of reviewing.

It’s always a good barometer of judging how good a car is by the reaction it gets in the Carparison office and the i4 was like nothing we’ve ever witnessed before.

Not only does it look the part visually, but the quality of the drive, the electric performance and the interior are as equally impressive.

It’s going to push the Model 3 very close. It’s hard to ignore the price differences between the two, with the i4’s starting price an extra £6,000 higher than the Tesla. However, following the latest changes to the Supercharger Network which allows the i4 to use a Supercharger, the gap between the two may not be as big as it once was.

With a healthy claimed range and a cabin space this good, the BMW i4 is making a very strong case to be the new go-to electric car.

Show me the best prices on the BMW i4! 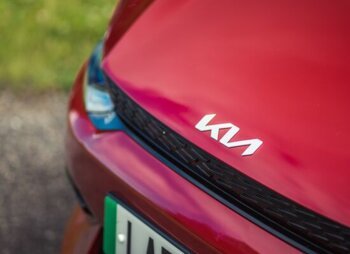 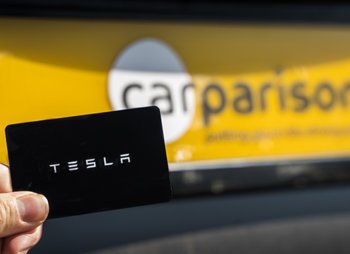